A Retrospective Approach to the Hispanic Community in Usa

Throughout the month of December till January of 2018, Boricua College will be celebrating a riveting jaunt into the kaleidoscopic world of Dominican artists, whose artworks may convey, with vivid colors, not only the ethos and motifs of our mixed ancestry, but also the rhythm and tempo in the motley tapestry of Latin America's social-cultural make-up.

Vicente Fabre, is one of the most original and expressive Dominican artists today, because he is concerned with the interpretation of reality, our inner world, i.e., the range of our emotions and thoughts, as opposed to the unerring accuracy of representational arts in the objectification of the visible world. Therefore, his artworks, often depicting gracious feminine figures, as the quintessence of fertility, dancing, gamboling and romping within the cycles of the picture-frame, may celebrate the creative music of eternal recurrence in the lively drama of existence. 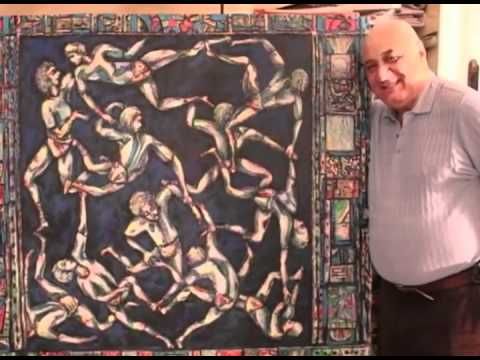 The lush canvases of remarkable artist Luis Breton, whose stunning realism of splendid landscapes and time-stricken colonial structures, however flanked with loveliest groves, delicate pastures and meadows, may place him as one of the finest landscapes painters from Latin America. 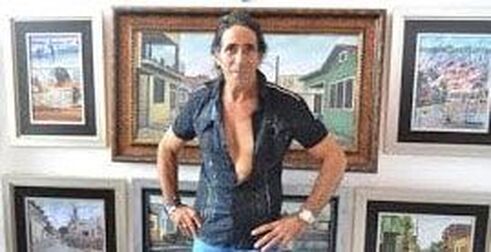 Mr. Breton's impressive oeuvre could attest to his lifelong passion for a Latin America still redolent of the luscious air and simplicity of former times. While urban life is almost transforming every aspect of the Dominican Republic, a lingering nostalgia for the simplicity of yesteryears, "Al Sur de La Inocencia," has lately revived a deep-seated hankering for the calm scenic views of our former days: a virgin country once deemed the rarest Gem of the Caribe by nineteenth century's Colombian writer, José María Vargas Vila. ​ 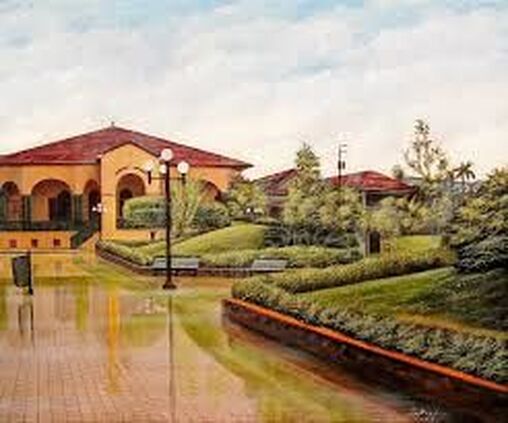 In stark contrast to the current political crisis besetting Latin America's once beautiful safe havens and splendid vistas, Mr. Breton's idealized depictions of the Dominican society, however ironic, could well speak volumes, for the fickle pages of history are simply unpalatable. Today we stand in front of these quiet paintings, and one may wonder what happened to the adventurous children of Christopher Columbus?

Luichy Martinez' warmhearted painting, Los Cosechadores (the Harvesters) could stir within us the most feverish memories of peasantry and simplicity in the bucolic sceneries of our past. The proletariat of the Dominican Republic, like those of Europe in the heydays of endless labor-fields for the illiterate farmer and the tiller, would eventually enjoy the privilege of urban society, but the lovely scenes of toilers cultivating the lands still remain an enduring chapter in the collective psyche of the Latino people. 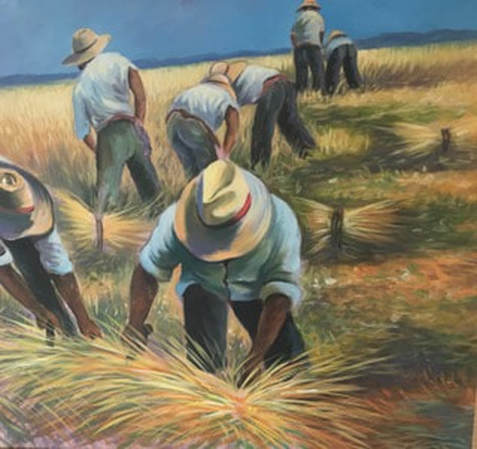 The history of La Hispaniola is flatly sprawled in the ever-stretching cane-fields, the ever-billowing plantations as the sole modus vivendi for the poor classes, but embellished by the awe-inspiring beauty of its paradisal surroundings, "Los Campesinos del Ayer," were once appraised, even sought-after, as the surviving stock of a dwindling species, former Spanish immigrants, whose archaic lingua and lilt, even today may smack of medievalism (e.g., Sabana Iglesia, the outskirts of Santiago, and the countrysides of el Cibao, on the North of D.R) may still bear witness to an earlier time much shrouded betwixt myth and reality.

Years of Haitian occupancy, may have shunted countless families to migrate to the uncharted lands of the countryside, but some may trace "the history of peasantry" to a natural process in the emancipation of the masses in Latin America, because unlike industrialized nations the likes of England or USA, the economies of Latin America, specifically the Caribbean Islands, may still lack the efficient apparatus to propel us on the foreground with the utopia of Adam Smith, Capitalism, the Wealth of the Nations.

Consequently, the society of the Dominican Republic, like that of Mexico or Brazil, may suffer from having the greatest discrepancy between the rich and the poor. Social mobility has become even more difficult for those trapped in the lowest rung of the social ladder of Santo Domingo. For those who live on the North Coast, el Cibao, famous for its fertile lands, agriculture, as the basis for any strong economy, could prove advantageous in the long term.

Ivan Villa Arango, the Horizon of Our Dewy Mornings and Sunsets:

Capturing the blissful moments of a sunrise, or a glorious sunset, could be one of the most uplifting experiences for any artist, and when I first saw a canvas by landscapes artist Ivan Villa Arango, I felt this inner peace which surpasses understanding. Little by little, I felt these wafting drab clouds, dark bowers and haunting silhouettes becalming in the roomy expanses of my existence. ​ 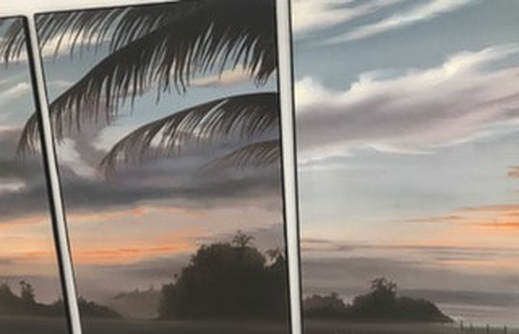 Mr. Arango's fondness for far-receding patches of loveliest skies amidst penumbras and flitting shades in the haze of distance, could convey the other uncanny veils of Latin America: a world still tinged with the somber spirits of our predecessors.

Those dark-green groves are placed athwart our path, and the august palm-trees, juxtaposed against a partly-lit sky, seem to speak most eloquently to a heart still sensible for this wailing music as imported to us by the errant winds of history.

Palm-trees pining to our dreamscapes, may add another dimension to the meaning of existence. Hordes of immigrants have left the Island, but one may fancy to seeing these fleeting figments, like those lonely palm-trees forlorn, forsaken in the shorelines of our past, our cherished memories still toning the canvas of Latin America.

Joining the small group, one may come across the surrealistic, Pre-Raphaelite artworks of other promising artists, whose subject-matters, technical prowess, however painted with liveliest colors and skills, could well deserve a place in the intimate gallery of our most cherished memories with Latin America.

Eusebio Quiñones, the Religious Canvas of Our Past:

An artist's canvas is believed to be a faithful monogram of his inward world, but how far-fetched, subtle, varied, manifold, and multidimensional the forms and colors beneath the outer-layers of the mere pictorial, representational or narrative!

Mr. Quiñónez' agreeable scheme of complementary colors, symbols and iconography may hint at other truths behind the frocks of religious faith, because mankind's most persistent aspiration has been the abode of the twinkling stars. Regardless of nationalities, we are thus carried away to the happy promises of heaven: the blessed mind of the artist. ​ 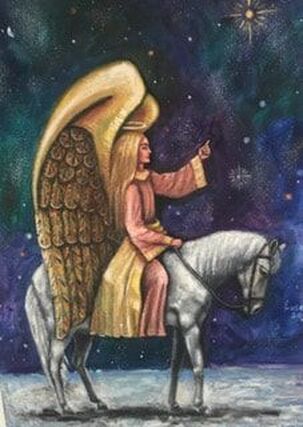 Herein we find a winged angel, a knight (un caballero) riding a white horse, left hand pointing upward to the high-paved venues of genuine religion, science, but above all, showing us the Vesper of Inspiration (La Estrella Matutina) for those who seek illumination, peace, perfection and chastity in the mysteries of Christ.

Christ with Angels, the Flower of Life, and the Merkabath, 40 x 50 by Eusebio Quiñónez: 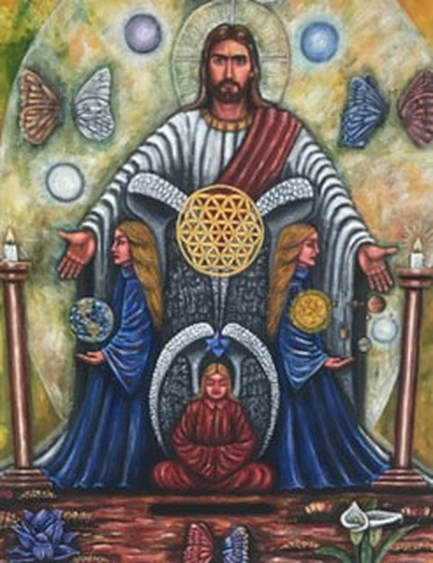 ​The Sinuous Canvas of Leon Felipe Tamariz' Web of Dreams:

Leon Tamariz' stunning imagery, true to nature and remarkable technical virtuosity, perhaps at the level of Salvador Dali, may reward his creative artistry as one of the most extraordinary talents ever born in the Dominican Republic. 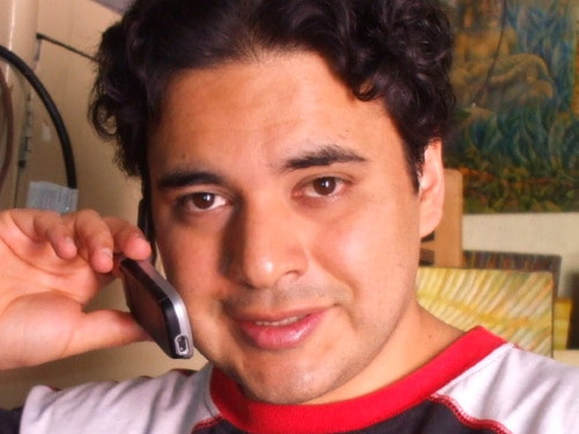 ​His art, which is a web of dreams, Dalinian and Freudian, but kindred to Van Gough's penchant for sinuosity and spryness, could speak volumes for those who seek interpretation beneath the outer layers of symbols, forms and colors in the collective psyche of a people. 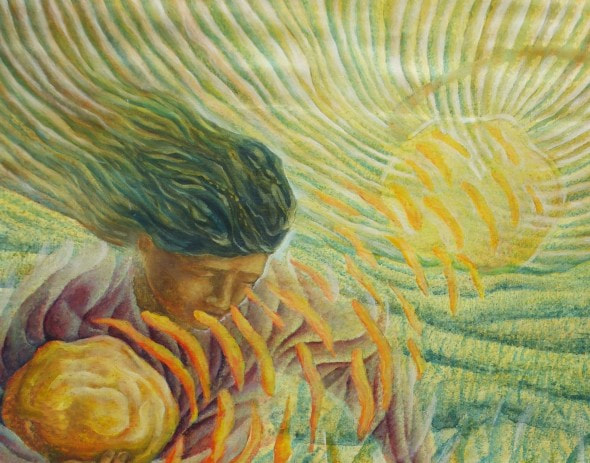 What strikes me most about Mr. Tamariz' artistry is his technical prowess, "symmetry and balance," to fusing both, the subjective and objective, with equal force and resourcefulness in the ever-billowing strings of his astonishing prolific imagination.  ​

Mr. Tamariz is a promising talent, and I hope he will continue