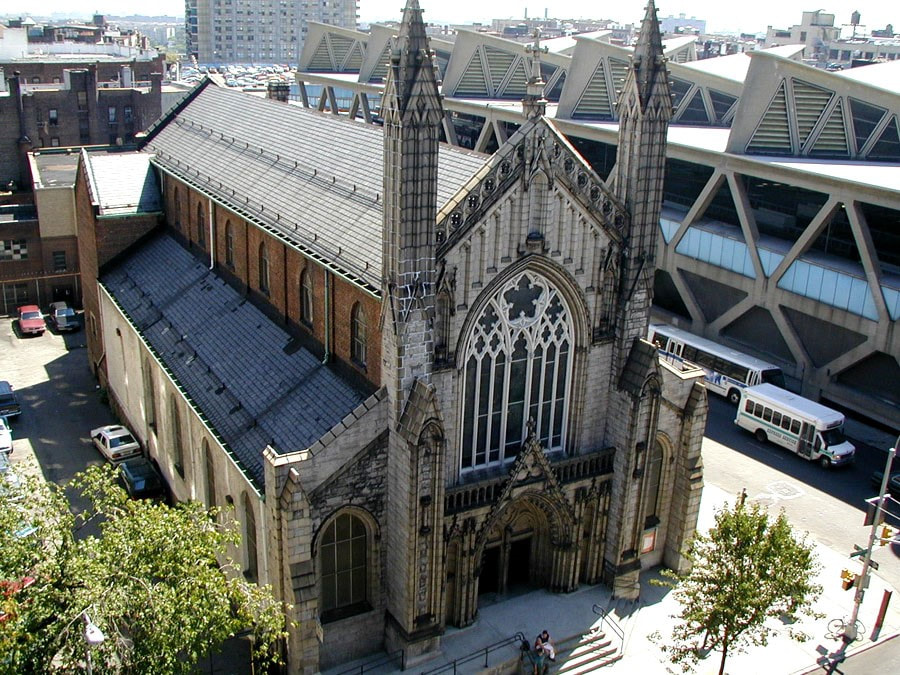 I know some of you to be skeptical about ghostly apparitions, but occasionally, some strangers, or elusive shadows, may simply defy our comprehension. With the passing days, nonetheless, they are soon to add another dimension to the meaning of life. 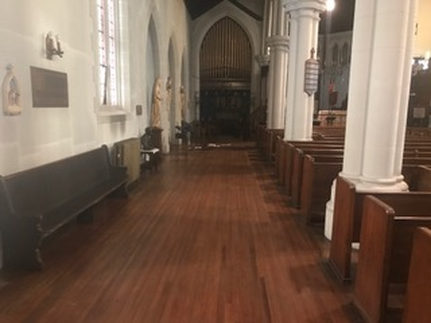 As I glanced over the pews and exiting door,  I saw a dark-skin woman stayed herself briefly by the foyer. The stranger, however remaining aloof, was also witnessed by my friend Maribel (Jily's wife) who had been sitting closer to the middle of the church's row of pews.  We both saw the stranger conduct herself silently by the left aisle.

Her apparition was faintly illumined by the glimmer of the sanctuary's lamps, which could still cast some reflections upon the left-side aisle.  As she reached a small chapel, adjacent to the sanctuary, we lost sight of her.

The stranger, by judging her countenance, appeared to be reaching her 60.  She was neither slim nor far, but rather appeared slightly obese but with a healthy physical constitution. The unknown visitor was neither attractive, nor ugly, her mien appeared to be that of a lovely woman, a devout religious person.

The passerby, soon caught sight of us, did not greet us, but rather went on straightway, leeways, towards a little chapel located by the end of the left aisle.

Around 7:45 pm, as instructed by Fr. Luis Barrios concerning the visitation of strangers by the evening hour, I felt it was time for me to close the church, and, politely, summoned Maribel to ask the parishioner to please leave the small chapel.

Maribel, glancing through the aisles and pews, asked me to address the parishioner myself, because she and her husbands were simply visiting the church.

At this,  I made up my mind to reach the light-switchers located behind the main sanctuary, and soon started turning-off and turning-on the few light-bulbs by the chancel area.
I turned off the light so as to expedite our dismissal, and, as instructed by the church's wardens, no one, not even a homeless person, could remain inside once the front door is locked. This judicious measure is taken in consideration to the church's properties as liable to trespasses, lawsuits and potential damages --even by people disguising themselves as homeless, parishioners or passersby.

I then summoned the lady from the sanctuary this wise saying:

Woman, it is time to leave the church:

She did not come out of the little chapel as I expected, nor did she make the slightest movement, but I keenly felt her presence as she physically manifested herself through main-entrance door.

Then, out of courtesy, I decided to go to the small chapel, and thus be able to speak to the stranger, that it was time for all of us to vacate the church.

Upon reaching the small area, I only found the little roomy space but empty, bereft of any prayer, yet filled with hovering questions pressing and swelling within my mind's aisles.

O my gosh!  It seemed as though the woman had been gone.  When I looked at the ghostly scene of my inquiry, chilly blood ran cold through my jugular, then shivers went down my spine, because, I reasoned, by heaven's sake, the devout woman is simply kneeling on her knees and praying like a good parishioner.

Forthwith, I informed Jily and his beloved wife, Maribel, that the said mysterious woman had not been found according to our expectation.

Maribel, at this, was filled with panic, and summoned us to leave that place at the first opportunity.

By all means of conjectures and speculations, I tried to appease my friends with any possible explanations, and promised them to carry out a thorough, "in-depth inspection of the said small chapel," which could harbor a religious woman in its small confinement, yet hidden from any public scrutiny.

To no avail, we diligently searched and inquired the whereabouts of this elusive mysterious woman, but only mute walls and rows of silent chairs were there as witnesses, deaf-ears to any queries.

Nevertheless, and much exhausted by our constant reconnaissances, everything was simply confirming our chilly doubts and vexations:  that the said woman in question was perhaps a ghost.

At some point, I even fancied to seeing a lady escaping through a hidden chamber, or sallying forth through a corridor, or hiding herself at the rear of the sanctuary --but Maribel would have cast sight of her presence.

As much as we tried to recollect our senses, we had no clue where was she?

Was she a homeless woman, a worker, a parishioner?  If such were the case, then why would she resort to such clandestine behavior?

However a deceptive shadow, a woman is perhaps playing tricks on newcomers.  Poor fools!   Unaware of all the theatrics so frequent in any church, for how long would we suffer to be the plaything of ghosts?

The lady could not hide herself from us, save in that small chapel of prayers, and even there she was not to be found.

Some Plausible Explanations to This Daunting Conundrum:

Early this morning, and still beset by a legion of doubts and chilly sensations gnawing at my gut, I payed a formal visit to the priest-in-charge at the Holyrood Episcopal Church in Manhattan, Rev. Luis Barrios, who happened to be in company of Mr. Carlos, sexton, and thus procure to elicit a satisfying explanation to the strange ghostly apparition of that woman:

One plausible explanation to this conundrum:

The said woman, was perhaps a homeless person  --is indeed a persuasive  argument -- had left the church while we had our attention focused on Mr. Nelson's performance of Chopin's sad tune: Nocturne in E flat.

This latter deduction, upon further inquiries, was discarded as unlikely to be the case, because Maribel, who happened to be sitting by the middle-pews, would have full view of both aisles of the entire interior of the church, and I, standing on the upper platform of the sanctuary, could likewise reconnoiter the comings or goings of any person or unexplained entity.

From these perspectives, we both could see any lady, or ghost, "una muerta," exiting the church with the irrefutable testimonies and evidence of our senses.

Rev. Luis Barrios, upon hearing the eerie nature of what had just transpired inside of his church on Monday night, teasingly, had surmised the sad music of Chopin, Nocturne in E flat Major, to be ideal for a seance, and perhaps the haunting tune had lured-in the roaming spirit to finding lodging in that little room.

Ah!  I felt this speculation to be delightfully creepy.

What do you think my reader?

Later, in his office, el Reverendo, in a more serious tone, confessed to me the periodic visitations of such haunting experiences in his life as priest, but overtime, he has somehow developed a remarkable fearlessness to confronting any paranormal phenomena.

"I am not afraid of ghosts."

"...Mysterious persons come and go as it is expected in any church.  Some, however, do leave behind an uncanny trail of mysteries. Be these folks dead or alive or saints, frankly speaking, they don't frighten me."

Thus spoke the priest with a calm expression beaming on his agreeably joyful face, for he is totally convinced that the soul continues to exist in the hereafter.

Dr. Luis Barrios, is one of those remarkable men who has descried human society from every angle, from every corner, from every metaphysical perspective, and has thus learned much about human nature in general.   Currently, he supports himself as a profesor of criminology at John Jay College in New York City.

After weighing down the strange appearance of that woman on Monday night, Rev. Luis Barrios, speaking in a rather amusing Puerto Rican lilt, told me that in his church, in a sacred area, close to the sanctuary, there are to be found certain large boxes or sepulchers reserved for those who wish to be cremated. Their ashes, at the behest of his or her memories, are then interred in those little boxes.

Thus assured me Mr. Carlos, a part-time acolyte in his ministerial duties at the Holyrood Episcopal Church, and currently running for the position of church-warden.

Carlos, a conservative Dominican immigrant from the time of Trujillo,  still remembers some former parishioners with striking details and lucidity.  Fixing his eyes on me to dispelling some nagging doubts, he summoned me to describe the physical aspect of the woman of our dread.

"From what I gather concerning this woman, she is a ghost."

With these final words, Carlos corroborated my haunting feelings: the parishioner was actually a ghost.

Meanwhile, I glanced across the aisles, and even walked through a back door behind the sanctuary, to seek other unchecked passages...uncharted areas in the human heart, perhaps overlooked by my two other inquisitors, Jilly and Maribel.

The quiet place, however beautiful, appeared to me a little spooky, and I felt to be in seance with former generations of believers: that little room, for the last one hundred years, has shrined the most haunting feelings of the human heart.

My dear reader, the conclusion of this story is obvious: that woman is a ghost, and she is probably haunting that church for some unexplainable reasons. 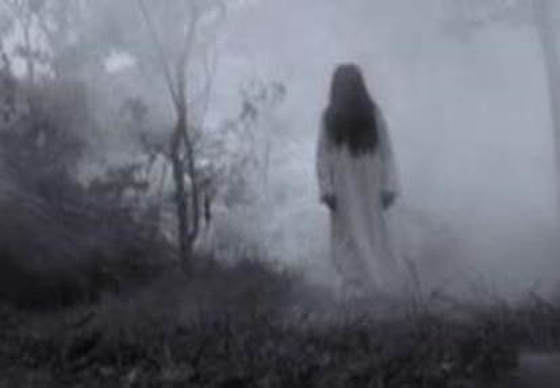